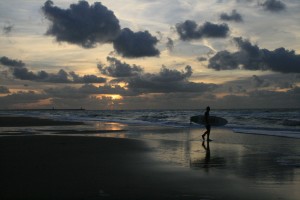 A man like Russell Carter knew when someone intended doing him serious bodily harm. Even when standing alone on the jagged rocks that ringed his childhood break on the cusp of dawn. Something about those three guys who’d pulled up next to him in the car park seven minutes and forty-three seconds earlier kept triggering his internal alarm. It rarely let him down. And it wouldn’t shut up…From No Man’s Land

WHERE HE COMES FROM

When Carter was fourteen years old, his mother died of a heroin overdose in Bangkok and he joined the order a secret martial arts vigilante society. This was an off the books, black operations arm of an Australian Government security agency, originally employed to counter terrorism in South East Asia.

THE SURF – HIS CHURCH

The one place where he found solace and the world made sense.

THE WOMAN HE CAN’T LIVE WITH OR WITHOUT

A lone figure stood just on the edge of the parking lot, watching him, and he felt a pulse of adrenalin. Though he hadn’t seen her for over a year and had tried to make a relationship work with another woman, not a day went by that Erina wasn’t in his thoughts. She was a far tougher opponent than the three fanatics put together. And considering the morning’s events, he knew she hadn’t turned up to wish him a merry Christmas. From No Man’s Land

The shark might get him, but his fear would not.

Any one-on-one battle must first be fought with the eyes, then from the heart and finally through the body.

“Accept what is, is,” he told himself. It was the first of the order’s principles and one he had always struggled with. Another was “Expect the unexpected.” As he considered what had transpired that morning, Carter smiled wryly to himself. He’d clearly let that one slip over the past few months.

“We would rather die than follow that which you worship. We reject all of your beliefs, all of your ideologies, all of your teachings on social issues, economics or beliefs. Between you and us there will always be a ravine of hate and we will be enemies until you follow God’s law.” Abu Bakar Bashir

He kicked his legs harder, pushing his torso further out of the water, and forced Samudra’s head under, holding him down using every ounce of his weight. From No Man’s Land