Sporting achievement became my holy grail when I was eight years old. I was playing my first Rugby game for the Newport Seahorses against the Dee Why Lions. 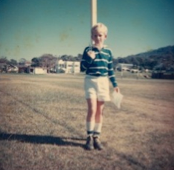 Twenty minutes into the game, I dived on the ball over the try line and unwittingly scored a try. All my teammates rushed over to congratulate me.

I experienced my first sporting high and have been hooked on the feeling for life. I still tear up when I see young people play Rugby on Saturday or hear the national anthems before a Test match. For me, Rugby is a cross between a sweet science and brutal poetry.

My love of sporting excellence carried over to my career as journalist on The Sydney Morning Herald where I had my own sports column and the good fortune to interview some of the world’s great athletes. 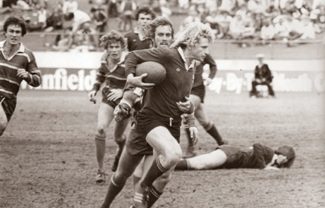 Even though I played first grade rugby for Randwick and University of New South Wales, I never felt I reached my potential. And it wasn’t purely lack of physical ability.

I could be brilliant one week, frustratingly ordinary the next. What made the difference was something that happened in that space between the ears.

When I interviewed sportspeople as a journalist, I was always trying to figure out what the precise qualities were that made them great.

This has carried over to my fiction writing. In Russell Carter, I’ve tried to create a main character who exhibits those elusive character traits that enable some people to operate at the highest level.

A strong link exists between how an elite athlete responds to sporting challenges and how the main character of an action/adventure thriller deals with a crisis.

The star performers in both fields are well trained and highly motivated. The greater the obstacles they face, the better they perform.

When under extreme pressure and everything is on the line, these characters transcend their fear, dig deep and take themselves to a place most of us can only imagine. 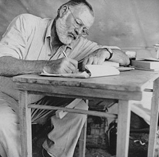 As Ernest Hemingway said, ‘Courage is grace under pressure.’

While few of us have the physical skill required to perform outstanding feats, we know greatness when we see it. Such actions reveal what human beings are capable of and touch our spirits.

The same happens for me when reading a good story where the main character is highly trained and capable and faces seemingly insurmountable difficulties.

One of my favourite novels is the samurai story, Musashi, often referred to as the Japanese Gone with the Wind. I’ve read it at least half a dozen times and every time feel like I am walking in the great samurai’s shoes, meeting the challenges he faces and seeing the world from his point of view. 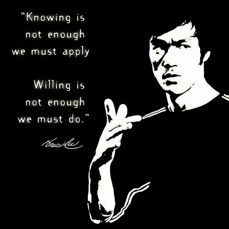 As I’ve said in a previous blog, I’ve always been drawn to the mystical quality of the martial arts. To me, a Zen like awareness of the world produces the right action.

As with Musashi, the first time I came across the Jack Reacher character in Lee Child’s book, The Enemy, I felt I’d found a writer who’d succeeded in doing what I wanted to do in a novel. That is, create a character, who when confronted with physical danger, operated (thanks to his military training) at a far higher plane than the ego-bound tough guys who made the mistake of crossing him.

These characters have the ability to think like an artist and see the world as an athlete.

One trait these action / adventure characters from thrillers have in common with elite sportsmen is they exhibit a dry sense of humour. It reveals who they are and how they respond to danger.

Most people, when confronted by violent challenges, tense up and are prone to panic. The action character becomes still, calm and maintains their perspective. 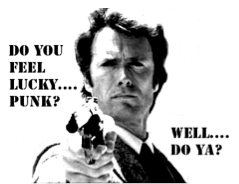 In that classic scene from Dirty Harry, the Clint Eastwood character tracks down the bad guy, points a gun at his head and says, “I know what you’re thinking. ‘Did he fire six shots or only five?’ Well, to tell you the truth, in all this excitement, I kind of lost track myself …

He pauses a moment and then says. “You’ve got to ask yourself one question: ‘Do I feel lucky?’ Well, do ya punk?’

This understated reaction to high drama is very similar to the now legendary story of how the San Francisco 49ers quarterback, Joe Montana, nicknamed ‘Joe Cool’, exhibited grace and good humour under pressure during the 1989 Superbowl.

The 49ers were trailing the Cincinnati Bengals by three points with 3:20 minutes left on the clock. 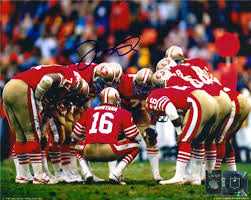 In the huddle, Montana, rather than give his team mates a chest thumping rally cry, simply drew his teammates attention to the stands and said, ‘There, near the exit ramp. Isn’t that John Candy?’

He went on to lead the 49ers on a 92-yard drive, throwing the winning touchdown with 34 seconds left.

“There have been, and will be, much better arms and legs and much better bodies on quarterbacks in the NFL,” said a former teammate, “but if you have to win a game or score a touchdown or win a championship, the only guy to get is Joe Montana.”

At the beginning of the high school year, I couldn’t wait for the ‘footy’ season to start. In my final year, we were asked to fill in a vocational guidance questionnaire, regarding what we wanted to do when we entered the next phase of our lives.

Even though I went on to study Arts/Law at the University of New South Wales, the only idea I could come up with at the time was – professional Rugby player. Despite the fact the sport was amateur at the time. 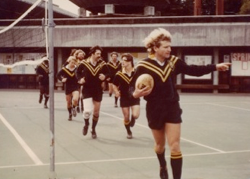 Ironically, I did get to live out my dream when I was the paid captain/coach of the University of California Santa Cruz Rugby team, known as the ‘Banana Slugs’. The emblem is on the t-shirt worn by John Travolta in Quentin Tarantino’s Pulp Fiction.

Being a paid Rugby player and coach was up until that point, the best year of my life. Bearing mind at that point I hadn’t met Kathleen or started writing action/adventure thrillers.

While the characters I’ve been speaking about are all operating at an elite level, the same principles apply to everyone trying to do their best in everyday life. 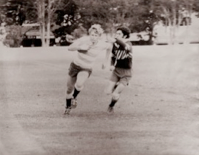 My Rugby days are well behind me, but I still surf regularly. How well I perform and how much I enjoy the experience is totally dependent on getting my head in the right place.

When sitting out the back waiting for the next set to roll in, I often remind myself to be like Carter and to see the world through his eyes. When I do, I catch more waves, feel at peace with the world and have more fun.